Please join us for the launch and release party of, Christopher Lyke's book of short stories: The Chicago East India Company

There will be a reading and discussion between author Christopher Lyke and Erin Diamond, writer/spoken word artist at 7pm 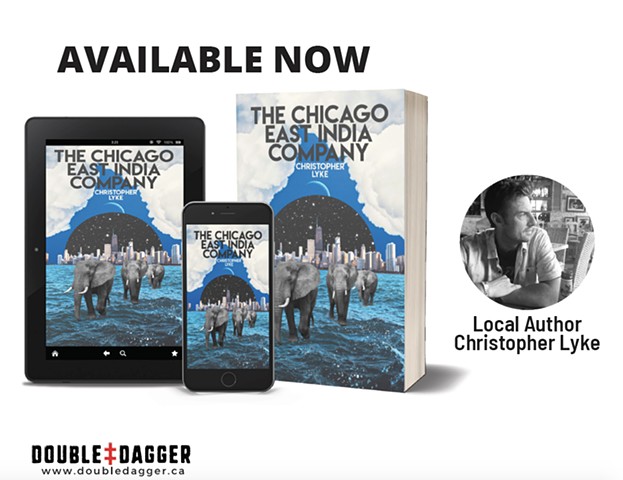 Chicago, IL: Canadian publisher Double Dagger Books has released debut fiction by Chicago veteran and author Christopher Lyke. The Chicago East India Company is a series of short stories and vignettes that mixes the existential struggles of its aging narrator with the truth that, eventually, imperial wars come home to roost. In Lyke’s writing, we see how the logic of the war in Afghanistan is transferred to the classrooms of Chicago’s public high schools, causing America to be reborn in a shape that was never intended. Lyke’s setting shifts in time and place but forever casts the main character of The Chicago East India Company as someone trying to maintain his sanity, his humanity, and his kindness as the state and its bureaucratic machinations unknowingly try to take them away. Phil Halton (publisher, author of This Shall be a House of Peace and Blood Washing Blood: Afghanistan’s Hundred-Year War) says “Lyke is part of a new generation of veterans who have turned to writing to exorcise their demons and critique the flaws in American society that nearly two decades of foreign wars have exposed. In the tradition of Camus, Orwell or Steinbeck, Lyke’s work illuminates human nature and seeks the truth hidden under layers of grit.” David Hoenigman (author of Burn Your Belongings, Squeal For Joy, and Man Sees Demon) describes the work as, “A fearlessly personal, disquietingly honest, and subtly hilarious look at a chewed up and spat out man.” A launch party has been planned for November 11th of 2022 at Material (@materialexhibitions) at 2025 W. Belmont, Chicago, IL. The book is available for purchase through Amazon and at select bookstores in Chicago. About Double Dagger Books: Double Dagger Books is a Canadian military- and security-focused publisher of fiction and non-fiction. Based in Toronto and founded in 2022, Double Dagger seeks to publish writing that transcends the idea of “War” as merely a genre and focuses instead on using conflict to highlight essential elements of the human condition.