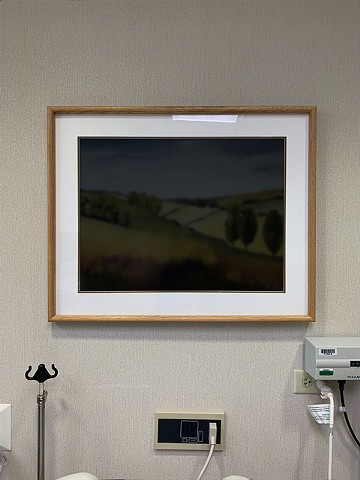 In 2019, my partner was diagnosed with pancreatic cancer. As I accompanied her to consultations, tests, and treatments I found myself considering the spaces in which the clinical met the individual. The hallways, waiting areas, and examination rooms were a pastiche of industrial wall coatings, clinical equipment, and artworks. In particular I was struck by the artworks that had been selected for display, often copies of well-known master works and pastoral scenes, placed into nearly identical serial cubicles. These visual spaces were meant to distract and calm and yet, I could only reflect on the fact that that was their purpose. All this while contemplating the unimaginable.

The process of dealing with a cancer diagnosis and the resulting responses led to early consultations, surgery, radiation and chemotherapy in Chicago, Evanston, and Milwaukee. As the treatments continued, we navigated COVID within the medical establishment, which brought an enhanced sense of isolation and distance. At their most strict, the COVID protocols forced my partner to go to day-long treatments alone. However, in most cases, I was able to accompany her to consultations with her doctors as critical treatment decisions and test results were discussed.

A year later, after a recurrence of disease, the family relocated to Los Angeles, CA so my partner could join a clinical trial. New classes of institutions were mapped into our lives and are reflected in the project. In the summer of 2021, after nine months, and what seemed like significant health gains, the family returned to Chicago and soon thereafter my partner entered hospice care.

I returned to these images last year with a renewed interest in what they meant to me not only throughout the lengthy illness, but also what they had come to mean to me now. Predominantly depicting images of natural landscapes, often depicting humankind’s place within it, I have darkened the images themselves as a means to create tension between the built environment and the art on display. It is hard to escape that these clinical spaces are designed for an unending series of medical rituals; tests, treatments, and hard conversations.

Recreating the space of encounter with these artworks in a gallery exhibition, mounted on and integrated into assemblages, the walls shift and are contorted, simultaneously representing the distortionate emotional weight of the experience, while also signaling the impossibility of reliving it through the promise these artworks seem to hold out hope of delivering. In this way, Treatments draw back the curtain on the process of the more realistic depiction of the experience, becoming art; while the depicted artworks emphasize the return to nature, promising palliative moments of a brighter place, a happier time, they are now eclipsed by a reality they can no longer address.

Mat Rappaport is an artist and filmmaker known for works that utilize mobile video, performance, and photography to explore habitation, mass-tourism, perception, and power as related to built environments. Recent projects include the Range Mobile Lab (RML) performances employing a 1995 GMC step van, augmented with external cameras that capture video from the surrounding environment and then projects the video onto the windows as the RML navigates the city. The Range Mobile Lab supports media performances, architectural collaborations, and direct community engagement. The RML continues Mat Rappaport’s effort to shape the experience of urban environments through media-based interventions. In 2021 Rappaport completed his first feature documentary, touristic intents, which asks, “can a building be guilty?” by exploring the redevelopment of the Nazi resort in Prora, Germany.

Rappaport’s work has been exhibited in the United States and internationally in museums, galleries, film festivals, and public spaces. Recent projects have been featured during EXPO Chicago, the Chicago Architecture Biennial in 2019 and 2017, Anniversary of the Jewish Ghetto in Venice, Italy, and 2018 Ann Arbor Film Festival and performances with the Range Mobile Lab at the Museum of Contemporary Art in Chicago and the Block Museum at Northwestern University.

Rappaport is an Associate Professor in Cinema and Television Arts at Columbia College in Chicago.